The Spy Who Tweeted Me: Intelligence Community Wants to Monitor Social Media

Word to the wise… That advice about not posting anything you wouldn’t want you mother to see? You may want to make that Mama, Papa, and DARPA.

A research arm of the intelligence community wants to sweep up public data on everything from Twitter to public webcams in the hopes of predicting the future.

The project is the brainchild of the Intelligence Advanced Research Projects Activity, or Iarpa, a relatively new part of the spy community that’s supposed to help investigate breakthrough technologies. While other projects exist for predicting political events, the Open Source Indicators program would be perhaps the first that mines data from social media websites.

The idea is to use automated analysis to sift through the deluge of publicly available data to help predict significant societal events, like a popular revolution. The nascent project, called “Open Source Indicators,” is just the latest move by the national security community to come to grips with the flood of information now available on social media. As Danger Room’s Lena Groeger has reported, it’s also intended to predict natural disasters or economic disruptions.

The science underlying the project is the notion that early indicators of major social upheavals might be hidden in plain, socially-networked sight. “Some of these changes may be indirectly observable from publicly available data, such as web search queries, blogs, micro-blogs, internet traffic, financial markets, traffic webcams, Wikipedia edits, and many others,” the announcement, published August 25, says. “Published research has found that some of these data sources are individually useful in the early detection of events such as disease outbreaks, political crises, and macroeconomic trends.”

Indeed, social media sites, such as Twitter and Facebook, garnered major attention during recent events like the Arab Spring, and have been credited with helping to organize protesters and even foment revolution. Authoritarian governments trying to hold on to power noted the trend, and attempted at times to shut down access to those sites — and occasionally the Internet as a whole — in the hopes of stymieing efforts to organize protests.

The idea of the U.S. intelligence community culling data from social media is still a new one, and is likely to raise a number of questions. For example: what constitutes public data?

Iarpa, for its part, defines public data as “lawfully obtained data available to any member of the general public, to include by purchase, subscription or registration.” That raises its own host of questions, like whether the intelligence community could register a fake profile on Facebook, in order to “friend” people and obtain more information.

For those who fear the all-seeing surveillance state, Iarpa says there are some things the program won’t do. It won’t be used to predict events in the United States, for instance. Nor will it be used to track specific individuals.

The American Covil Liberties Union has a guide to changing you Facebook privacy setting, given the newly touted features. You might want to book mark the site, as a commenter pointed out he could not yet see these features and it seems to be in the midst of being rolled out. 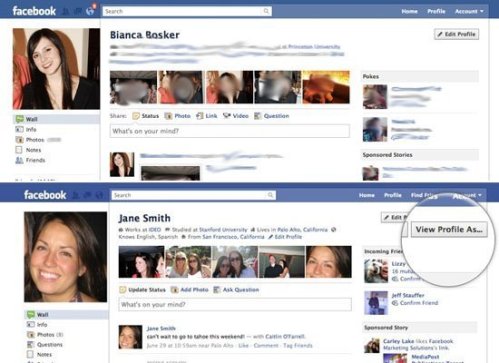 My Name Is Me (Hat tip: @northlandfox)

There’s long been an issue with real-name policies on the internet and those of us involved in human rights work over the years are painfully aware of why it’s so important to allow anonymity. The Red Elm fully supports the use of pseudonyms and hopes that G+, Facebook, and others will see the light soon.

Below is the My Name is Me “About” page. Please give the site a visit.

“My Name Is Me” is about having the freedom to be yourself online. We want people to be able to identify themselves as they wish, rather than being forced to choose names by social networking websites and other online service providers.

Websites such as Facebook and Google+ ask you to use a name that conforms to a certain standard. Though their policies vary, what they would like you to use is the name that appears on the ID in your wallet, your employer’s records, or on the letters your bank sends you. They don’t understand that many people go by other names, for a wide variety of reasons.

Some of the types of people who want to choose their own names online include:

Choosing your own name online doesn’t mean you’re a fraud or a spammer. It just means you want people to take you at your word: you are who you say you are.

Using a name of your own choice gives you the freedom to express yourself freely; take better control of your privacy; and be judged by your actions rather than your gender, race, or religion.

Can the NSA and CIA use your phone to track your location? | ITworld

There’s no need to panic, or start shopping for aluminum-foil headwear, but the super-secret National Security Agency has apparently been thinking frequently enough about whether the NSA is allowed to intercept location data from cell phones to track U.S. citizens that the agency’s chief lawyer was able to speak intelligently about it off the cuff while interviewing for a different job.

“There are certain circumstances where that authority may exist,” even if the NSA has no warrant to investigate a the person whose privacy it is invading or global permission to eavesdrop on everyone, according to Matthew Olsen, the NSA’s general counsel.

He didn’t come to talk about that particularly; he said it yesterday in response to a question from the Senate Select Committee on Intelligence, which was considering whether he’d be a good choice to run the National Counterterrorism Center.

The question of whether it’s legal is “very complicated,” Olsen said, implying nothing is going on along those lines right now.

There’s No Data Sheriff on the Wild Web – NYTimes.com

Everything ends up in the hands of hackers. What federal law covers such a breach of consumers’ privacy?

This lack of federal oversight has incensed privacy advocates for years. But the last several months have been an online consumer’s worst nightmare.

About two weeks ago, hackers dived into Sony’s PlayStation 3 game system, resulting in the loss of up to 77 million customers’ personal and private information and over 12 million credit and debit card numbers.

Data Mining: How Companies Know Your Personal Information – TIME (via @cafbear) #in

Three hours after I gave my name and e-mail address to Michael Fertik, the CEO of Reputation.com, he called me back and read my Social Security number to me. “We had it a couple of hours ago,” he said. “I was just too busy to call.”

In the past few months, I have been told many more-interesting facts about myself than my Social Security number. I’ve gathered a bit of the vast amount of data that’s being collected both online and off by companies in stealth — taken from the websites I look at, the stuff I buy, my Facebook photos, my warranty cards, my customer-reward cards, the songs I listen to online, surveys I was guilted into filling out and magazines I subscribe to. (See pictures of a Facebook server farm.)

Google’s Ads Preferences believes I’m a guy interested in politics, Asian food, perfume, celebrity gossip, animated movies and crime but who doesn’t care about “books & literature” or “people & society.” (So not true.) Yahoo! has me down as a 36-to-45-year-old male who uses a Mac computer and likes hockey, rap, rock, parenting, recipes, clothes and beauty products; it also thinks I live in New York, even though I moved to Los Angeles more than six years ago. Alliance Data, an enormous data-marketing firm in Texas, knows that I’m a 39-year-old college-educated Jewish male who takes in at least $125,000 a year, makes most of his purchases online and spends an average of only $25 per item. Specifically, it knows that on Jan. 24, 2004, I spent $46 on “low-ticket gifts and merchandise” and that on Oct. 10, 2010, I spent $180 on intimate apparel. It knows about more than 100 purchases in between. Alliance also knows I owe $854,000 on a house built in 1939 that — get this — it thinks has stucco walls. They’re mostly wood siding with a little stucco on the bottom! Idiots.

EXelate, a Manhattan company that acts as an exchange for the buying and selling of people’s data, thinks I have a high net worth and dig green living and travel within the U.S. BlueKai, one of eXelate’s competitors in Bellevue, Wash., believes I’m a “collegiate-minded” senior executive with a high net worth who rents sports cars (note to Time Inc. accounting: it’s wrong unless the Toyota Yaris is a sports car). At one point BlueKai also believed, probably based on my $180 splurge for my wife Cassandra on HerRoom.com, that I was an 18-to-19-year-old woman.

RapLeaf, a data-mining company that was recently banned by Facebook because it mined people’s user IDs, has me down as a 35-to-44-year-old married male with a graduate degree living in L.A. But RapLeaf thinks I have no kids, work as a medical professional and drive a truck. RapLeaf clearly does not read my column in TIME. (See 25 websites you can’t live without.)

Intellidyn, a company that buys and sells data, searched its file on me, which says I’m a writer at Time Inc. and a “highly assimilated” Jew. It knows that Cassandra and I like gardening, fashion, home decorating and exercise, though in my case the word like means “am forced to be involved in.” We are pretty unlikely to buy car insurance by mail but extremely likely to go on a European river cruise, despite the fact that we are totally not going to go on a European river cruise. There are tons of other companies I could have called to learn more about myself, but in a result no one could have predicted, I got bored. (Comment on this story.)

Each of these pieces of information (and misinformation) about me is sold for about two-fifths of a cent to advertisers, which then deliver me an Internet ad, send me a catalog or mail me a credit-card offer. This data is collected in lots of ways, such as tracking devices (like cookies) on websites that allow a company to identify you as you travel around the Web and apps you download on your cell that look at your contact list and location. You know how everything has seemed free for the past few years? It wasn’t. It’s just that no one told you that instead of using money, you were paying with your personal information.