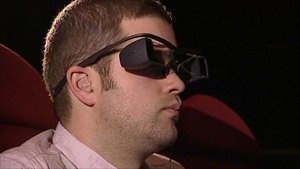 If someone with a hearing disability wants to watch a film that isn’t already subtitled, they have very few options. But now, Sony UK is developing a pair of glasses that display subtitles in time with a given film.

Sony’s Tim Potter tells the BBC that the subtitles would appear is though they’re on the screen:

After trying them out, Charlie Swinbourne seemed pretty pleased with the effectiveness of the special specs. “The good thing about them is that you’re not refocusing. It doesn’t feel like the words are really near and the screen is far away. It feels like they’re together.”

The glasses are expected to start popping up in UK movie theaters next year. But if you’re hard of hearing and already wear glasses, it might be time to consider contacts. [BBC via Yahoo]

Naki’o is the world’s first dog to be fitted with a complete set of four prosthetic paws, according to incrediblefeatures.com. Naki’o was barely 5 weeks old when him and his brothers and sisters were abandoned by a family fleeing their foreclosed home. Having barely survived the Nebraskan winter, all four of the dog’s paws were deformed into rounded stumps after being stuck in an icy puddle.

Incrediblefeatures.com reports that Veterinary technician Christie Tomlinson “organized a fundraiser to pay for Naki’o to have his two back legs fitted with prosthetics.”

He took to these so enthusiastically, that Orthopets decided to complete the process free of charge. It was the first time they’d fitted an animal with a complete set of new legs.

Now, Naki’o is able to run, jump and play just like other dogs, thanks to the second chance his new set of legs have given him.

Device Allows Disabled to Drive With One Hand (via @dcfemella @amplog)

“Ten and two.” If you took a driver’s education class, there’s a good chance you had that phrase drilled into your brain by an instructor advising you two think of the steering wheel as the face of a clock, always keeping both hands on the wheel — one at 10 o’clock and the other at 2 o’clock.

But for people with zero or reduced mobility in any of their upper or lower limbs, keeping both hands on the steering wheel and feet ready at the pedals can present some difficult challenges.

While cars car easily be modified to accommodate drivers of all shapes, sizes and mobility levels, a team of Spanish researchers recently created a single device that lets a driver steer, accelerate, change gears and brake with just one hand.

Developed by Asociación RUVID, a consortium of five Spanish research institutes and companies, the prototype is completely electronic. Having no mechanics involved helps those who may have reduced strength in the device-operating hand. As well, motors in the device are used to simulate the haptic feedback and sensations of a traditional, mechanical steering wheel.

“When designing a new system [we] wanted to eliminate our concept of the mechanical technology and implement technology based on electronics, which offers more versatile solutions,” said  team leader José Solaz in an RUVID news release.

The prototype was recently presented during the 13th EAEC European Automotive Congress in Valencia, Spain.

Scientists report in the Lancet a case of a 23 year old man paralyzed from the chest down who was able to learn to stand and walk with the aid of a spinal stimulator. This is an interesting advance, but news reports are careful to point out (correctly) that it is not a cure.

Rob Summers suffered an car accident in 2006 that damaged his spinal cord at the T1 level – just below the neck. This would mostly (although not completely) spare his arms, but render him weak in the legs. According to the case report he had no detectable leg movement and lost bladder control but had partial sensation in the legs. This is an important detail to put this case into perspective – Summers’ injury was partial, if severe. This means there were some neurons that were spared.

How a Blind Man Drove the Daytona Speedway, With the Help of Lasers cc @racingsouthwest @AdvocacyArts

Mark Anthony Riccobono, who is blind, tells PopSci about his mile-and-a-half drive
By Juliet Lapidos

Mark Anthony Riccobono, who is blind, drove a modified Ford Escape hybrid on the Daytona International Speedway, turning to avoid obstacles. He navigated using feedback from the car’s laser sensors and cameras, installed by a team of researchers from Virginia Tech and the company Torc Technologies. PopSci spoke by phone to Riccobono, the executive director of the National Federation of the Blind’s Jernigan Institute, which researches new technology for the blind.

How did you know when to turn?
The car’s laser range-finding sensors sent data to a computer, which in turn sent me directional information. I was wearing gloves with motors in the knuckle. When I needed to make a sharp left, the motor on the left pinky vibrated. For a more gradual turn, the index finger, and so forth.

Vibrating Gloves Pick Up Steering Clues From an Onboard Computer:  Courtesy National Federation of the Blind/Virginia Tech

Did you have a sense of how fast you were going?
My top speed was 25 or 26 miles per hour, and I had a general feel for what the vehicle was doing. A strip on my seat gave me a more exact impression, kind of like looking at a speedometer. The strip also contained motors—it was like a massage chair. If I felt vibrations around my knees, I knew I needed to speed up. As I accelerated toward what the car considered a proper speed, the vibrations moved up my leg, toward my back.

What would you do to make cars even better in the future?
The car I drove has just two interfaces [the gloves and the driver’s-seat strip]; I can imagine adding an auditory component that would provide advance information about oncoming turns or traffic. Like a GPS system: “Approaching a left turn in 500 feet.”

And someday, blind drivers could get enough data to make decisions for themselves, rather than following the car’s directions. But the Department of Motor Vehicles probably isn’t going to change its vision requirements anytime soon. In the meantime, are there other applications for this technology?
Right now driving is purely visual, which is limiting, when you think about it. The work we’re doing could encourage non-visual innovation. Everyone has a blind spot. Maybe there’s an auditory solution to that problem. And if it’s raining hard or there’s a blizzard, drivers can’t see the road clearly. The interfaces we’ve developed could help make driving easier and safer.

In order to make information on the United Nations and its activities available to the widest range of audiences, and in keeping with resolutions of the General Assembly, the Department of Public Information (DPI) is actively pursuing accessibility of the United Nations website by persons with disabilities. The objective of DPI is to comply with the Web Content Accessibility guidelines of the World Wide Web Consortium standards, which at the present time are the only standards with worldwide recognition.